Warning: "continue" targeting switch is equivalent to "break". Did you mean to use "continue 2"? in /homepages/25/d503928385/htdocs/clickandbuilds/ROMA488339/wp-content/plugins/qtranslate-x/qtranslate_frontend.php on line 497

Warning: Parameter 2 to qtranxf_postsFilter() expected to be a reference, value given in /homepages/25/d503928385/htdocs/clickandbuilds/ROMA488339/wp-includes/class-wp-hook.php on line 286
 Oscar Chamorro »
Skip to content

Warning: Parameter 2 to qtranxf_postsFilter() expected to be a reference, value given in /homepages/25/d503928385/htdocs/clickandbuilds/ROMA488339/wp-includes/class-wp-hook.php on line 286 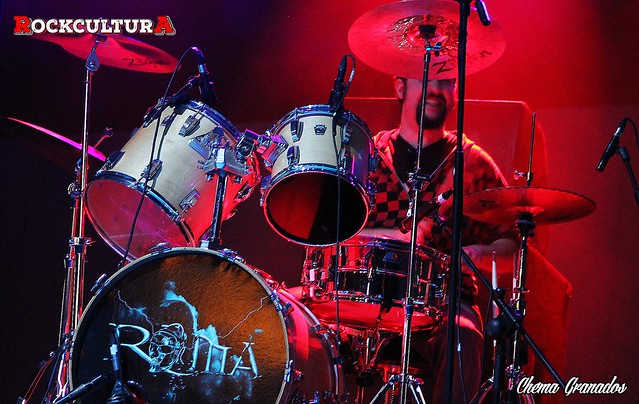 Óscar Chamorro Donoso, a versatile drummer, since he began his career at the age of ten, has been totally self-taught until the age of 18 (year 2000), which had his first Heavy-Metal band (Glamdring) and at 19, he was able to start studying with Oscar Martínez in Quintanar de la Orden (Toledo). From there, it has been a non-stop of bands of different styles: Heavy-Metal, Punk-Hardcore, Blues, Pop, Rock, Thrash-Metal, Percussion, Orchestras, etc … coming from the great majority of Quintanar de la Orden and other sites such as: Villamayor de Santiago, Cuenca, Quintanar del Rey, Pedroñeras, Casas de Benítez and Madrid.

On May 23, 2013 he won The Battle of the Drummer’s War II contest and the speed contest with the Drumometer in 835 blows in a minute, in the Gruta 77 room (Madrid). In 2014, he participated with his colleague and partner Deivhook, in the First Spanish Drummer Mafia

His musical career was always in the area of ​​La Mancha, where he tanned and took a lot of experience, until one day he decided to go to Madrid to find his life …. After several searches and some proofs, in 2013, through Luis García (Ñú Drummer, Sobredosis, Ramoncín, The Mondragon Orchestra …) became part of Texola, a band from Southern Rock, led by the singer, Juan Huerta (Sobredosis, mythical band from Heavy in Madrid). In it were guitarist Quique Ampuero (Tangana),  Miguel Ángel Jiménez (Media Luna) and bassist José, , who after a while for incompatibility left the band and entered temporarily, Daniel Redondo, friend, companion and current bassist of Roma. After almost a year of several concerts with Texola, Miguel Ángel told Oscar that Roma, Manuel Maestre’s band (Cráneo, Azucena, David Gwyn, Stafas …), were going to need a drummer … After a short time, Manuel did a collaboration with Texola, in which, both were delighted with each other, having a certain complicity and understanding, talking and staying the following week to make ana audiction, leaving the rest of the band, more than satisfied with their way to play … While in Texola, Quique left, leaving Miguel Angel, leaving two important gaps in the band, in which after a lot of search of two guitarists, Texola, leaving only Juan and Oscar, had to dissolve ….

So at the end of 2013, after the departure of Raúl Rico from the ranks of Rome, Oscar Chamorro joined the band, contributing to the sound with a greater forcefulness and solidity in the base, until today ….

Currently, he studies in Car Garage Cam with his first teacher and friend, Oscar Martínez (Quintanar de la Orden), the courses of the Rock School, in which in 2015 he completed the Level 4 Music Performance (equivalent of conservatory, to have completed a first year at University level) and this year ends up examining Level 6 Music Performance (equivalent to a Bachelor’s Degree).

It has three self-produced discs:

Hardpork – Mental Society (Band made with base Guitar loops and movie scenes.

Warning: Parameter 2 to qtranxf_postsFilter() expected to be a reference, value given in /homepages/25/d503928385/htdocs/clickandbuilds/ROMA488339/wp-includes/class-wp-hook.php on line 286

Register on our website and download for free "YOUNG BLOOD", the bonus track of our EP Life is Theater Subscri… Read More

ROMA IS A SELF-FINANCED PROJECT. YOUR CONTRIBUTION AND SUPPORT WILL HELP US CARRY ON. WE ARE HERE FOR YOU ... AND… Read More


Warning: Parameter 2 to qtranxf_postsFilter() expected to be a reference, value given in /homepages/25/d503928385/htdocs/clickandbuilds/ROMA488339/wp-includes/class-wp-hook.php on line 286